A Quick History of Club Car

Starting in 1958, Club Car was established in Texas. In fact, it was not even named Club Car in the beginning. In 1958, the Club Car we know today was named Landreath Machine. Then, in 1962, the company was moved to the famous golf cart mecca of Augusta, GA. It was purchased by Bill Stevens and the company went on to develop its first model named the “Carouche.” However, as it was meant to be elegant, it was quickly referred to as the “cockroach”.

As a small golf cart manufacturer through the 1960s and 1970s, it started to gain attention from some interesting parties. For instance, Bill and Beverly Dolan started E-Z-GO together, however, Bill Dolan left with 7 other top level E-Z-GO executives to take over the small, yet competitive, company Club Car. It became official in 1978, and the Club Car manufacturer we know today started to officially grow and become the competitive golf cart manufacturer to E-Z-GO.

In 1980, Club Car brought in designer Dom Saporito to put together the stylish electric golf cart that we know as the DS. The DS got its name from Dom Saporito’s name. From there, the next innovative model came to light in 1985 as the Carryall model. The Carryall was a utility vehicle built upon the golf cart design.

Club Car would make a few more ownership changes over the years. In fact, Club Car had an IPO on 1993 and would officially be on the NASDAQ. Not to long thereafter, Club Car was acquired by Ingersoll Rand where it resides yet to this day.

For more than 50 years, their employees have been a driving force behind the success of the company.

They have been designing golf carts with such diligence and with more than 600 distributors around the globe, Club Car is sure to continue to be around for decades to come and ensure to have great relations with their customers.

How Much is a Golf Cart? Here is a Current Price List 2019

Should Some Players Be Allowed to Use Golf Carts in PGA Tournaments?

How Club Car Keeps Its Leading Edge – A Q&A with President, Mark Wagner 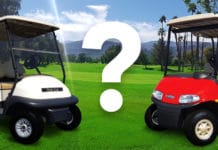 Which Should You Choose: Club Car or E-Z-GO?