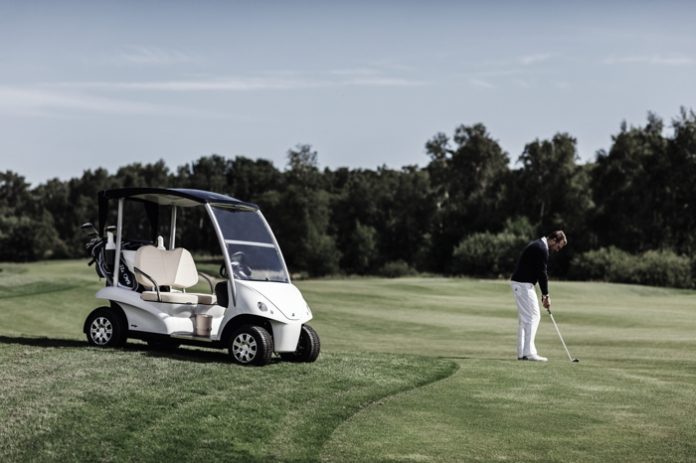 With its headquarters based in the lustrous pastures of Denmark, Garia has been in the Golf Cart Market for over a decade now. And as Garia would say, they are in the “golf car market” versus the golf cart market. That distinction is immediately known when an initial observer takes a look at a Garia vehicle. It almost contains the disposition of a vehicle designed for the future as it drives quietly with thoughtfully created design lines and quality components.

Garia started in 2005 and is a privately held company that uses some of the best European Components to create a vehicle with luxury, quality, and passion. This effort for passion is shown through their Mansory product line via their partnership. Mansory is a luxury car modification firm based out of Germany with work done on notable vehicles such as Bentley, Porsche, and other high-end brands. In addition, Garia has an ambassador for their brand through their relationship with Bubba Watson which helps give them a fair amount of publicity. In addition, the highly publicized “Real Sports Car” was revealed in 2015. “A Real Sports Car” is through a partnership with Mercedes Benz, however, this relationship has been dissolved as of 2016 due to Mercedes Benz saying the business case was not feasible.

Garia has initiatives beyond just being a luxurious golf car though. For instance, they are proud to be a zero emission manufacturer for their products. In 2015, Garia released a new product line of vehicles called Garia Utility. Garia Utility aims to be a producer of electric utility vehicles worldwide. Another notable endeavor for Garia is that they were the 1st golf cart manufacturer to utilize a lithium ion battery system. The system they implemented was from Samsung SDI and is now also being used in the E-Z-GO product line.

The future of Garia is still a little unclear as they try to continue to grow their brand. One thing is for sure though, when it comes to the most luxurious golf cart available for purchase, Garia will trump them all and have a price tag to match.