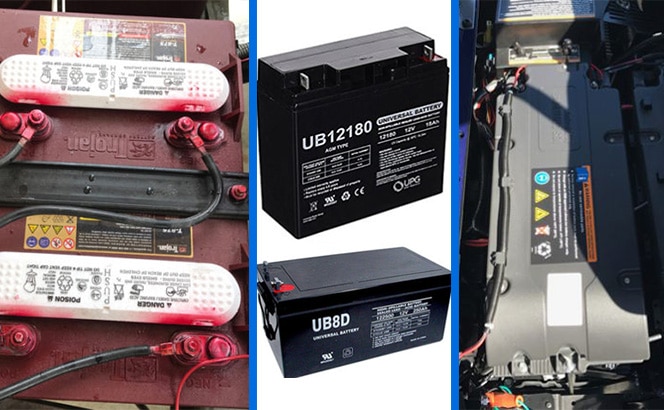 Question: What is the difference between a golfer and a scientist – not counting the fact that someone might happen to be both?

Here’s a hint: One difference lies under the seat of your golf cart, where a golfer generally sees between one and eight heavy plastic blocks connected together with insulated cables, each of these blocks filled with some kind of lead in a solution that churns out electricity when you need it. We laypersons call these things batteries.

What do we know about batteries?

What do we know about them? We know they are heavy. They have a positive post (an anode) and a negative post (a cathode) that represents the flow of electrons or electricity, because electricity isn’t much to talk about until it reaches its potential and that can happen only when it is flowing from one place to another (in what we call a current).

We know they are expensive. We know they can be dangerous, although for the most part, as long as they aren’t abused, over-charged or spring a leak, they are safe and reliable – given they have been around since the mid-19th century and we’ve learned how to build them quite well. Frankly, unless we drop one on our foot, they are very safe and very dependable until they get old and run out of juice.

What we see is a price tag and an occasional maintenance chore, however, scientists see something very different. They see an electrochemical power plant contained in a mostly sealed, rectangular shell. Inside, they know there is a controlled chemical reaction that defines the topic of the day – what is the difference between lead-acid, sealed and lithium batteries?

The Difference between Sealed and Lead Acid Batteries

The sealed batteries also vent a gas byproduct, but the absence of water evaporation means that for all practical purposes they can be sealed tight. Hence the primary difference between lead-acid and sealed batteries is only this:

The sealed batteries require no maintenance, while lead-acid batteries do.

The Difference between Lead-Acid and Lithium Batteries

Because they are sealed, however, lithium batteries share several important differences between themselves and unsealed lead-acid batteries.

The important distinction is that both sealed battery types (sealed lead-acid and lithium) do not leak. As such, sealed lead-acid batteries, for the most part, do not corrode at the terminal post and cable connections. Similarly, one of the benefits of lithium batteries is that they also do not corrode the exterior mechanics with which they come into contact, eliminating the need for occasional post and cable cleanings as a maintenance chore.

There are many other key differences between lead-acid and lithium batteries, however.

Let’s go back to looking at this like a scientist. From their point of view what occurs inside a lead-acid battery can create a sudden, big jolt of power – a bigger jolt than a lithium battery can create. As such, they are terrific for use in cars, as they have the power to turn over a starter motor and crank a flywheel even from a cold start. That’s quite an impressive feat unto itself, requiring a big bang of power.

A scientist might say a lead-acid battery uses very old technology to produce electricity with low energy-to-weight and energy-to-volume ratios. On the other hand, golfers and other laypersons would simply say they are big and heavy for the power they produce.

But they are also relatively cheap to manufacture, slow to recharge and produce a very strong surge of power compared to their weight. These heavy, old-style batteries are actually not as good as lithium batteries when asked to deliver a slow, constant level of power. They are actually better providing a jolt than they are in a “slow and steady wins the race” situation.

Even though they are light and expensive and often seen in modern gadgets, lithium batteries, in contrast, are terrific at going slow and steady and not so terrific at producing a sudden jolt of power in a pound-for-pound comparison.

That said, lithium batteries are sealed, maintenance-free, quick to recharge, long-lasting and very light. Obviously, these reasons lend themselves very well to running golf carts, where less weight means more speed and where long lifespans make them cost-effective. It doesn’t hurt, either, that they are quick to recharge and require virtually no other maintenance.