Golf Cart Resource
Home Helpful Articles Driverless Golf Carts: Where Are We Going With This? 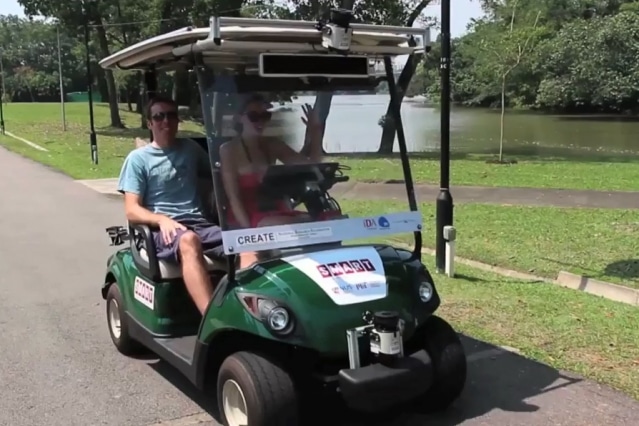 Is it possible that someday you will hop into your golf cart and take off down the road without pressing on the gas or putting your hands on the steering wheel? You might not even be sitting behind the wheel and there might not even be a steering wheel at all, because sensors will be figuring what’s up ahead, a global positioning system will be figuring out when to turn left or right and motors you can’t see will be turning the tires and straightening them back again as you take in the scenery while the golf cart drives itself.

Welcome to the world of autonomous vehicles. Certainly, you’ve heard of the frequently written about prototypes that often make for cheerful news reports after a slow news day. Even today, most adults may have heard of driverless cars, but relatively few have seen one in person.

In news reports, they are frequently referred to as “prototypes” or “test” models, some of which have been on the road for as many as 10 years. Among the earliest test models, the so-called Google car, is now called the WAYMO, which stands for “new way forward in motion,” according to Google’s website.

ARTICLE: A Look into Lithium Batteries in Golf Carts

Google cars with no drivers behind the wheel have safely scurried about for years, logging at this point, more than 5 million miles on the road, almost all of it on city streets, which the company says “would take the average American nearly 300 years to complete.” And the comparison Google wants you to make is pretty obvious: Can the average driver operate a vehicle for 300 years without an accident? In all likelihood, the answer is no.

Safety aside, what’s the fun of sitting in the back seat and reading a magazine, when you could be revving up your ego as the driver of a fancy car rolling down the road? Isn’t driving fun? Wouldn’t you miss being in control of the car if you just sat in the back seat and held hands with the missus (or visa versa)?

I asked one person that question – my sister. Nearly blind in one eye, an active, young grandmother, she immediately said, “I hate driving. I hate it more every day.”

Good to know. There’s a market out there somewhere for autonomous transportation.

However, all bets were off as of mid-March when a woman in Tempe, Arizona, was killed by a self-driven vehicle – one in which there was actually a backup human driver behind the wheel.

Various state capitals quickly retreated from legal permission for driver-less vehicles that had been trickling in in recent years.

In 2012 only six states had allowed autonomous cars to operate and these were often company-specific, as in “Google can operate a prototype …” By 2013, nine states had inched there way towards allowing autonomous cars and by 2016 that number had grown to 20 with eight other states allowing them to operate by executive orders from governors’ offices.

This, of course, leads us back to a discussion of golf carts and the critical role they could play in the development and legislative response to autonomous vehicles.

DEALER LOCATOR: Find a Golf Cart Dealer Near You!

It makes perfect sense that autonomous driving fits the residential golf cart lifestyle like a glove. Autonomous carts on residential streets makes much more sense than autonomous cars whizzing by at 70 MPH on the Interstate. So what better place than a residential community to organically develop policies that will serve our future as earth-friendly bipeds?

Are we looking at an electric car future? We might be. Are we looking at limiting cars to local trips, while turning to mass transit for long-distance movement? It might be so. Are we looking to explore options that keep major cities from building up banks of carcinogenic smog through development of more golf cart communities and neighborhoods? Without pushing this 25 MPH utopia too far, that doesn’t sound like a bad idea.

Vehicles that are limited to 20 MPH are ideal for the experiment of autonomous vehicles. It sounds cavalier to “how much damage can a plastic car going 20 MPH do?” but the question is still a valid one. We hope the answer is “No damage at all, thank you.” – but we’re not naive. A golf cart, meanwhile, weighs how much soaking wet? They are safer, inherently, than cars … by sheer physicality alone.