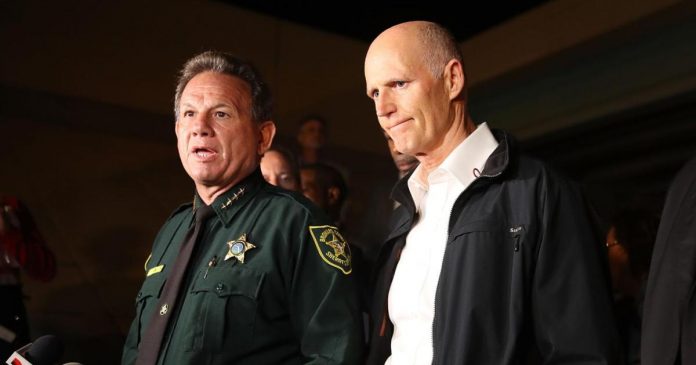 PARKLAND, FL – A new surveillance video released by the Broward County Sheriff’s Office by permission from a judge brings Deputy Scot Peterson’s job at stake. He was seen outside the Marjory Stoneman Douglas High School talking into his radio as the shooting was taking place inside the school. It was said that his slow response to the shooting created controversy where he could have stopped the gunman and prevented the mass massacre that killed 17 people.

The 27-minute video released Thursday starts at 2:22PM. At this time, someone pulled the fire alarm at the school. A man who appears to be a school staff member with Peterson were checking the door at a school building and later hop into a golf cart. As they climbed into the golf cart, they continued on to drive to a separate building.

It was around 2:23 PM, just a matter of seconds, the man was seen running urgently to another school building, but Peterson didn’t enter the property. The deputy was still speaking into his radio at this point.

Between 2:23 PM to 2:30 PM uniformed personnel appear to take cover outside the building. A Coral Spring Police Officer then arrived at the scene on target with the suspect, Nikolas Cruz’s, where he fired his last shot at 2:27PM.

In a statement released by the Sheriff’s office, “The video speaks for itself, His [Peterson’s] actions were enough to warrant an internal affairs investigation, as requested by Sheriff Scott Israel on Feb. 21.” His actions were inexcusable! He fled the scene in a simple golf cart! After being suspended without pay, Peterson chose to resign and immediately retired rather than face possible termination.

So, future police officers, please do not use golf carts to flee a scene where others are in danger. Use the golf cart to protect them!