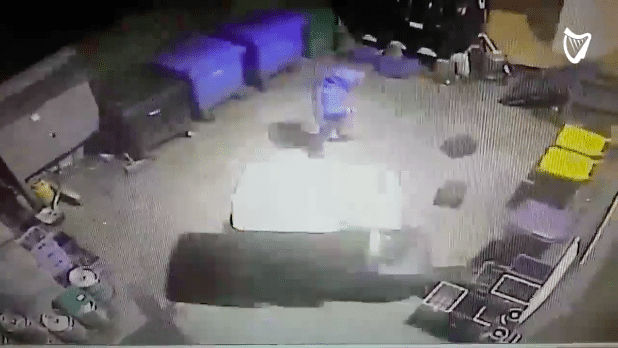 What do youths in hoodies do when they steal your golf cart?

Video footage from Ireland released by the Enniscorthy Golf Course, located in the town of Wexford, show someone carefully make a three-point turn inside a tight space in a storage garage, up, back, up and back. On the third trip back, however, the driver fails to hit the brakes on time and the cart smashes into what looks like a stack of heavy, plastic milk cartons and other large containers.

The driver then puts the cart into forward gear and runs straight into the items in front of him – two blundering driving mistakes that resemble a driver in a demolition derby or someone riding on a bumper car ride at a carnival or a county fair.

While the driver is smashing into things, two cohorts wearing hooded jackets appear on the scene. The driver of the cart, by then, has found the path out of the garage and takes off, where course officials say the real damage begins in what has become repeated incidents of late-night vandalism involving joy riding recklessly around the course. The vandalism, which has occurred on five or six separate occasions, includes taking unchecked trips across some of the greens and bunkers.

In one of the escapades, the vandals took the cart through a border fence, said a course official quoted in The Independent, an Irish newspaper. The vandals, who appear to be teenagers, then tore it up through the neighbor’s property before calling it a night.

The dangers of these midnight runs are clear, potentially involving huge sums in property damage and even larger sums if someone gets hurt, including one of the vandals.

After several incidents, course owners installed closed circuit television cameras inside the storage garage. All that this has yielded, so far, is the type of footage that amounts to Internet fodder – a one-minute clip that engages people’s attention momentarily, before the next viral splash comes along.

But in the golf cart community, alarm bells are ringing. Is your cart safe? Is the storage garage at your local golf course secure? Are you going to wake up some morning to find your golf cart has been taken for a joy ride late at night and, in the process, ripped an expensive green apart?

One course official at Enniscorthy, club captain Tim Morrissey, was quoted as saying, “It’s basically demolition derby type stuff. They have done considerable damage to buggies out on the course ramming into each other and crashing them into things.”

Morrissey added that “luckily” the vandals had not yet done too much damage to the greens. However, the threat of big expenses with green damage is very real. Morrissey estimated joy riding damage to a green could cost $4,500 per green.

On its website, the Enniscorthy Golf Course appears to be a moderately priced, neighborly course in south-eastern Ireland in the town of Wexford, about an hour’s drive south of Dublin.