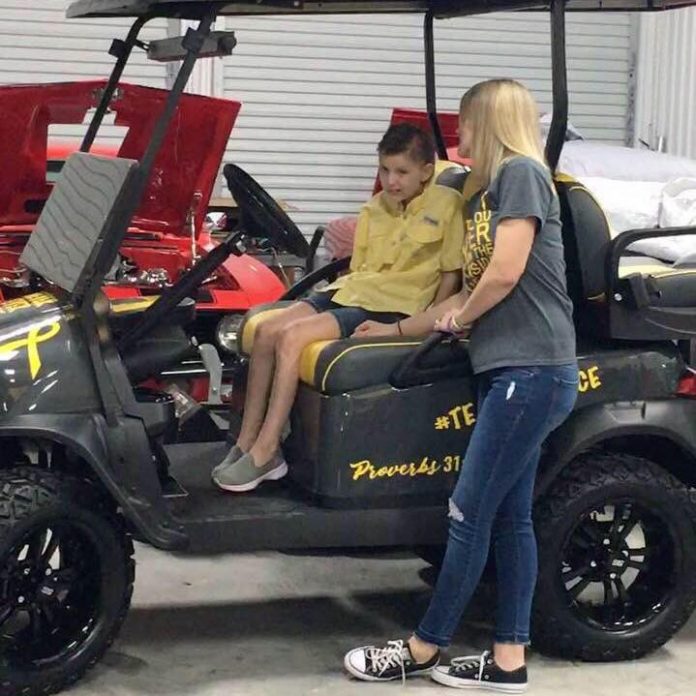 They discovered there was a tumor found at the back of her head during her surgery. While in surgery, they unveiled another tumor on her pituitary gland. During the process of chemotherapy and radiation, she had to learn how to walk and talk again. The country was engrossed with the girl’s courage and positivity, and they rallied behind her. She was just a ray of sunshine for them all to support. “People from, you know, pretty much all 50 states, praying for her and supporting her,” said Grayce’s mother.

Grayce says her brother, Bubba, taught her how to talk again. “He makes me laugh all the time,“ Grayce said. “And I think her biggest motivator was her older brother Caden,” added her mother. Their incredibly strong bond was a source of strength for Grayce.

The brave young cancer survivor wanted to own a golf cart so she could keep up with her brother. So, the district attorney’s office worked on the cart in private and were incredibly particular with the details to get the golf cart to be perfecet for Grayce.

“Just to see her eyes twinkle a little bit and know everything she went through, that’s the payment you’ll ever need” said Sergeant Brett Davis, Louisiana State Police.

The little girl was full of joy and love and her friends and family came together to celebrate her successful and courageous battle from cancer. Her freedom served as an inspiration to everyone fighting their own battles.