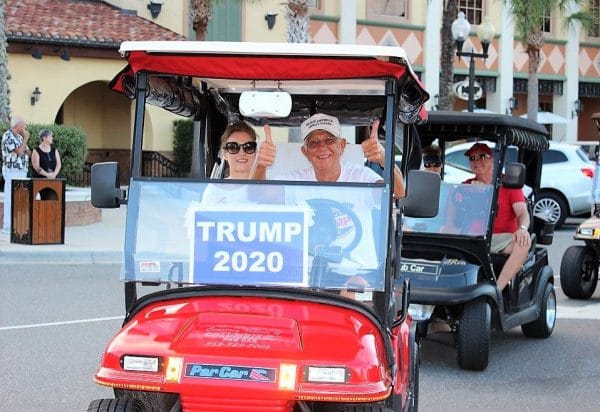 With the aging of the U.S. demographic and the rising popularity of golf carts in residential settings, especially in the Sun Belt, there is the growing likelihood that golf carts and politics will soon become popular bedfellows.

Such is the case in Sumter County, Florida, recently, where residents have gathered their forces for a golf cart parade to be held in support of one of President Trump’s signature pledges during the 2016 presidential campaign: The border wall between Mexico and the United States.

The border wall has been a consistent newsmaker from the presidential campaign days and beyond. Ridiculed by liberals and supported by hard-line conservatives, the Wall has become symbolic of the president’s nationalistic policies that included his attempts to ban immigrants from high risk locations, which became known as the anti-Muslim policy ban, to his protectionist trade policies.

The Wall has moved to the front page recently, as the dispute over funding for wall construction has prompted the stalemate between Congress and the White House that has resulted in a partial government shut down, temporarily keeping 850,000 federal workers from their jobs.

Trump, who says he is prepared to wait “months and beyond” for Wall funding before giving in, is asking for $5.6 billion to pay for tighter border security, including a Wall. The Democratic Party-controlled House of Representatives, meanwhile, has declared the funding a non-starter.

In Florida, a group known as “Villagers for Trump,” are taking action by putting together a “Build the Wall” Republican Golf Cart Parade, according to the Villages News online news service.

Villagers For Trump is preparing to host a “Build the Wall” Republican Golf Cart Parade on January 12, gathering their “Trump Train” of golf carts in a shopping plaza parking lot before chuffing through the Spanish Springs Town Square and back again in a demonstration of solidarity for Trump’s wall.

The event, Villages News reports, is not the first political rally in the retirement community oriented locale to make use of golf carts to demonstrate support of Republicans.

In October, prior to the mid-term elections, a caravan of 383 golf carts turned out in support of Republican candidates and in August a “Red Wave” rally was held combining golf carts and flag waving to show support for the president.