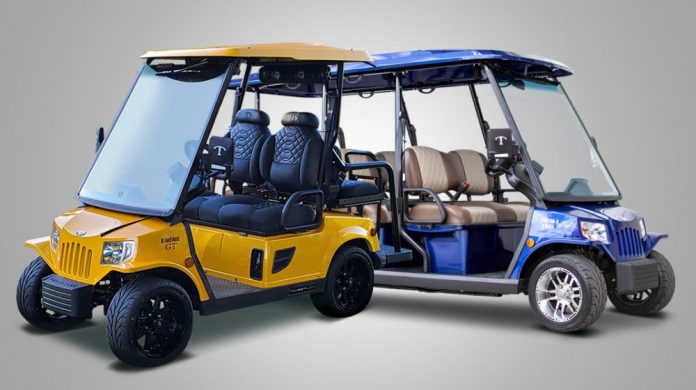 Just like the other higher-end E-MERGE vehicles, the GT offers electric power steering and is LSV Compliant. What makes the GT a class of its own are the new features including the capability of going 0-25 mph in 6 seconds, its 5 brand new colors, a 24″ Bazooka Sound Bar, custom 14″ Black Steel Belted Radials, and Custom High-Back Carbon Black Seats with the Tomberlin Logo embroidered into the fabric.

“The GT is the hottest production vehicle we have ever offered, with the ability to zoom from 0 to 20 mph in 5 seconds – and to 25 mph in 6 seconds, if you’re willing. And even more impressive, with standard 4-wheel brakes it can go from 20 to 0 in less than 12 feet. Just in case!”, said Tomberlin’s Chris Plummer.

With a potential seating capacity of 8 passengers, the E-MERGE E6 is Tomberlin’s largest vehicle to date. This limousine-style vehicle is available in both Tomberlin’s LE Plus and SS packages and features 3 forward-facing seats with the option to add a rear-facing, fold-down seat which will allow for adding up to 8 passengers or additional cargo.

For more information on the E-MERGE GT & E6, visit TomberlinUSA.com.