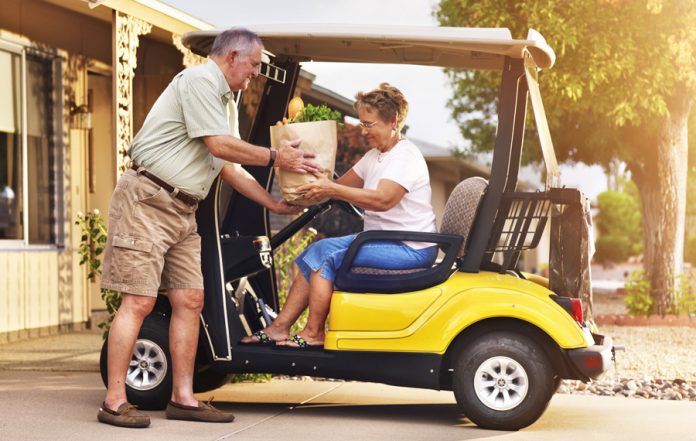 How does that expression go? When in Rome, buy a golf cart.

That expression actually applies to the Westhaven neighborhood of Franklin, Tennessee, where residents are finding a sudden explosion in the golf cart population. The Brentwood Home Page quoted Tennessee Golf Cars sales manager John Brient as explaining one reason people are buying the carts for residential uses. “As Williamson County grows, certain neighborhoods it seems to be more ‘somebody’s got one, somebody else wants one. It’s kind of a cool thing to do.”

It’s become so cool in the neighborhood to own a golf cart that resident, mom, wife, registered nurse and proud golf cart owner Nora Cobb Jewell was quoted as remarking, “The breeze, the open air – the kids love it.”

“Once you get the golf cart, I get it,” she said on her way to explaining why she changed her mind about golf carts and now enjoys the family’s zip-around-the-neighborhood golf cart. “We resisted all this for years,” she said, tossing in her original consideration of subdivisions, thinking she’d never live in one of those, either. (Now, she does.)

When in Rome, or Franklin, Tennessee, it turns out that golf carts that were once unheard of on neighborhood streets are proliferating. There were 58 registered low-speed vehicles in the village in 2014. By 2015, the number had climbed by 90 more. By the following year, 2016, there were 141 additional carts registered. The  next year – 2017 – another 147 joined in and for the first seven months of 2018, an additional 122 joined the crowd. By August, the grand total – given these low speed cruisers have remarkable longevity built into them – had reached 558.

These very cool, very breezy vehicles are used for any number of reasons from grocery shopping to taking the kids swimming to visiting the neighbors.

But many growth patterns, including a sudden growth in golf cart ownerships, go through what is well known as growing pains. In the case of golf carts, hamlets, villages, towns, residential communities and others are being forced to consider how golf carts can co-mingle with established roads use. It was reported that golf carts are now seen parked around the shopping areas of Franklin, even though the local police department information officer reminded the public that “the use of actual golf carts is illegal on all public roads.”

The popularity of golf carts is causing many other sunbelt communities to revisit their local laws regarding what vehicles people can use and what roads are open to golf carts – if any.

“A low speed vehicle that can be driven on a public way is very similar to a golf cart,” said Lieutenant Charles Warner of the Franklin Police Department. “They also have to have things like seat belts and horns and windshield wipers,” Warner said.

Meanwhile, Franklin, Tennessee, doesn’t really resemble Rome very much. No Vatican City. No Colosseum, no Sistine Chapel. But when golf carts begin to proliferate Rome, the two cities will have something in common.